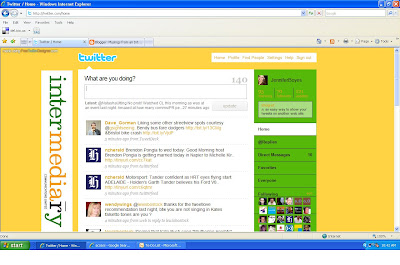 I was at a PR event last night and I was amazed at the number of eyes that glazed over when I mentioned the word 'Twitter'. A couple of people asked what it was and why I used it, one person had signed up but had never gone any further than that because he just didn't understand the tool. A lot of people claimed that they don't have the time or the inclination to use Twitter or any other online networking devices.

Firstly, I would like to dispel the myth that online networking takes up too much time. Obviously, you can spend as much time as you want online, using tools such as Facebook and Twitter. However, these activities don't have to be time consuming. Two or three meaningful Twitters a day are much more valuable than a stream of consciousness type approach, where you inform your followers of your second-by-second movements.

There are numerous benefits to being online. Twitter allows you to access news instantly. From a PR perspective, it gives you another chance to connect with the right people and gives you the opportunity to understand your audiences better. I follow a few Kiwi media figures through Twitter. By getting to know them through their Tweets, I can develop a better understanding of what interests them (and what doesn't!) This means that I am less likely to waste their time with stories that don't turn them on.

Twitter can be hugely valuable for your PR clients. It allows businesses to hear what their customers are thinking and what they want. For example, Vodafone can instantly respond to questions about the company and can get immediate feedback about their services, business approach etc. Twitter also allows the company to present a more human side- customers begin to feel more emotionally attached to a business as they are communicating and listening to a real person from that organisaiton.

I have a lot of faith in Twitter and think that those who ignore it- especially in communications and PR- will simply get left behind.

Thankfuly, there are a few NZ PR companies that are ahead of the rest of the pack and have realised the benefits of social media- Pursuit PR, Ideas Shop, Network PR, Rockstar PR and Intermediary Communications are all proud members of Twitter! Click on the links to visit each respective Twitter page.

Even the guys at TV3 are realising that Twitter is not just a 'flash in the pan'. Check out this segment on Campbell Live- Thursday, 19th March.

ETA: Bullet PR is also on Twitter. I knew they would be as the guys there are renowned for being very keen on online communications- I just hadn't managed to track them down when I first published this post!
1 comment:

GET READY TO BREAK A WORLD RECORD FOR UNICEF 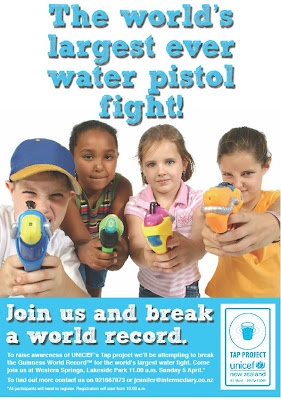 The date of UNICEF NZ's attempt at the Guinness World Record ™ for the World's Largest Ever Water Pistol Fight is fast approaching.

The free record breaking event will be taking place at Western Springs Lakeside Park, Auckland from 11am-1pm. According to Guinness World Record ™ rules, every participant must register before taking part in the event. The on-site UNICEF registration table will be open from 10am and will remain open throughout the event.

More than 2, 671 participants are needed to break the current world record, which was set in Spain in October 2007.

You are free to bring your own water pistol- as long as it is a standard, shop bought pistol. We will also have water pistols available at the event, in exchange for a $2 UNICEF donation.

Many thanks to Foley's and O'Brien Line Ltd., the Auckland based water carriers who have kindly provided us with a water truck for the event. No water pistols will run dry with these guys around!

WHY THIS PR LADY IS FED UP OF NEGATIVE NEWS STORIES 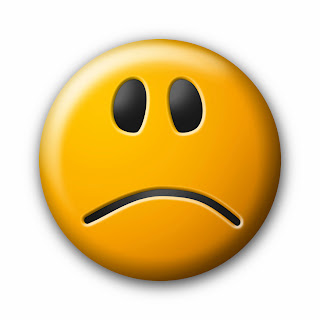 Even though most of us are loath to admit it, we absolutely love reading negative news stories. Whether it is poring over details of the alleged battering of Rhianna by Chris Brown, shedding a tear over Jade Goody's terrible ordeal in the UK or even reading depressing tales about the credit crunch and property prices- if a publication prints it, we will read it. These kinds of stories sell newspapers and magazines.

I wonder why this is.... Is it because stories about the downtrodden and desperate make us feel better about our own lives? Is it because these tales give us something to gossip about with our friends and work colleagues?

Whatever the reason- I'm sick of it. I want to read stories about people and businesses who are bucking the trend and are doing well, despite the current economic enviroment. Some newspapers are having a stab at providing this. I recently read a regional newspaper that was making a special effort to publish positive stories about businesses in the area. Unfourtunately, the name of the paper has totally escaped me...if anyone can remind me, I would be very grateful!

The folks at NZ PR company, Durning PR, are also doing their bit to tempt us out of our current negative mindset. They have just launched their own 'Gloombuster Awards' to reward businesses with positive stories to tell.

If you are a business owner with a good story to tell, make sure you get in touch with your local paper and let them know about it. Some types of negative news stories do sell papers. But I think more and more people are reaching the same mindset as me. Enough of the depressing news angles- give us some positivity!
No comments: 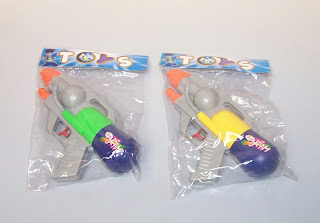 On Sunday, 5th April 2009, we will attempting to break the Guinness World Record for the largest water pistol fight ever held!

We need over 2,671 people to make it into the record breaker's club so come along with your friends and family and help us smash the record. If you're lucky you might even get your face in the offical Guinness World Record book as there will be a photographer there.

The water pistol fight will take place at Western Springs Lakeside Park, Auckland from 11am - 1pm. Feel free to bring your own water pistol, as long as it is a standard shop bought model (no real gun replicas or super-charged, customised, rocket launcher type pistols please!) You can also purchase a rather cool looking pistol from us in exchange for a $2 gold coin donation (see the photo at top of this blog)

This event is to raise awareness of the UNICEF NZ TAP Project campaign. Tap Project is a nationwide fundraising effort. It involves restaurants and cafes across the country inviting their customers to donate $1 or more for the tap water they would normally get free.

The Tap Project campaign, which runs from March 9th 2009 until April 9th 2009 celebrates the clean and accessible tap water as an available privilege to millions, and also raises money so that UNICEF can provide safe drinking water to children around the world.

If you would like to keep up with news about the water pistol event, you can join our Facebook group.

I will also be twittering about the event on a regular basis.
No comments: